With a total area of ​​150,000 km ², the Pantanal is the largest wetland in the world. The majority of the Pantanal is in Brazil, covering part of mato grosso and a considerable part of the northern region of Mato Grosso do Sul. However, Pantanal also extends to the neighbor countries of Bolivia and Paraguay. The highest concentration of wildlife in the Americas can be found at the Pantanal; with flood plains whose environment is rich in nutrients that support plenty of wildlife, including capybaras, iguanas, turtles, otters, pumas, tapirs, deer, caiman, monkeys, raccoons, anacondas, anteaters, armadillos, ocelots, skunks and the rare and majestic jaguar. In addition to all these animals, an impressive number of 670 bird species that can be found in the Pantanal.

Life in the Pantanal

During the drier months, water flows slowly from north to south, which leaves scattered pools that become a vital source of food for the animals. Many animals migrate all the way to the north to find these pools that have a high concentration of fish.

In this changing habitat, the water in the Pantanal is never stationary, this makes its environment fertile with about 50 species of reptiles, 100 different mammals, and 1,500 types of plants.

Such richness of the Pantanal helps support a major part of the wildlife of South America. Pantanal is one of the best places to find giant anteaters, armadillos, and giant otters.

Northern Pantanal is slightly drier than South Pantanal, due to its slightly higher elevation. It is possibly more accessible via the main city of Cuiabá.

Composed of approximately 100 wooden bridges, the Transpantaneira Highway earned a place as the highway with the highest amount of bridges in the world in the Guinness Book of Records.On each side, you will see large artificial trenches filled with water throughout the year.

These trenches provide shelter for wildlife during the dry seasons, if you travel through the Transpantaneira Highway on the months of October and January, you may have a chance to peek at the subtle jaguar.

At the beginning of the rainy season, the series of river systems overflows causing large open plains of the southern Pantanal of Mato Grosso do Sul to be swallowed by the massive quantities of water. This flooding results in a detonation of aquatic vegetation.

This explains why the first Portuguese explorers misinterpreted the region by an ocean, naming it Xaraés Sea. If traveling around this period of wet months, it is suitable to bring along mosquito repellent.

From April onwards, it is the perfect time for photographers to visit the region since the rainy day turn into clear skies. In July the temperature rises, water levels decrease and the pools shrink into ponds called “ebb Castle” fenced in large pieces of grassland.

he 260 species of fish that reveled in the deluge of the previous season are now left scrambling for space and flocks of birds take advantage of this banquet.

The concentration of different species this time of year is an absolute delight for birdwatchers and anyone with a passion for nature. Dry season reaches the top during August through September and the landscapes appearance becomes similar to that of the African savannah until the rain returns again in October.

Birdwatching in the Pantanal

Pantanal has one of the most diverse bird communities; perchance the most spectacular sights, even for non-birders, are the communities where different bird species meet occupying the trees calling this “ninhais”.

Northern Pantanal is the home to many bird species that can not be found far away in the south but in the Amazon,as the Sunbittern. With 15 species of parrots present, including the Hyacinth Macaw endangered whose tail is nearly 1 meter long and is bright cobalt blue, the best place to find parrot species is the Pantanal.

The Waterfowl of the Pantanal are also phenomenal. Pink spoonbills, herons and storks huge flocks can be found during the dry season. The characteristic red and black cap of the Tuiuiú is referred to as the icon of the Pantanal and it also is the largest of its kind in America.

45 species of birds of prey have their home at the Pantanal.

Want to know more about the Pantanal? Then see the list of facts below: 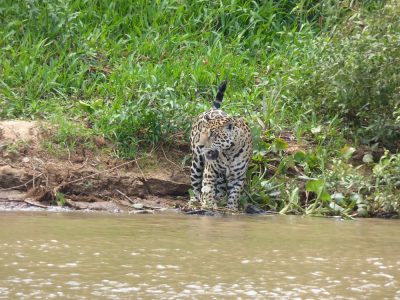 “I thought I would drop you a line to thank you for your help in arranging what was a wonderful trip. All of the internal flights and arrangements worked very smoothly indeed. The lodges we went to were ideal for what we wanted, and a special thank you for finding our guide, Bianca, who was wonderful. The variety of wildlife we saw was special – we were lucky enough to see a puma and maned wolf (!), as well as three jaguars and a tapir! Plus over 200 species of birds in the Pantanal.”